Nick Baucom served his country honorably for six years as a U.S. Marine. When he came home, he wanted a way to keep his fellow veterans gainfully employed and away from the challenges of adjusting to civilian life. He founded Two Marines Moving in 2008 to give Virginia businesses and residents a moving option they could trust, one that reflected the reputation and integrity of the Marines.

“The moving industry is known for some unscrupulous actors, but you can always trust a Marine,” Nick said. From just one man with a rental truck, Two Marines Moving now employs over a hundred veterans from the Marine Corps, Army, Navy and Air Force.

“We were able to grow quickly through our blood, sweat and digital-first marketing mentality.”

At the peak of their growth, Two Marines Moving was regarded by national publications as one of the fastest-growing private companies in America, doubling their revenue every year for three years.

“When people think about a ‘fastest-growing company,’ they usually don’t envision a traditional business like ours. But we were consistently growing at 100 percent year-over-year,” Nick said. “Google was an integral part of that growth.”

With a 200 percent return on investment, AdWords continues to drive business for the company. It also helps them target and recruit veterans, which is one of their primary objectives.

“What separates us is who we hire. Our company is 97 percent veterans, and we want to continue offering them opportunities,” Nick said.

Google Analytics equips them with the insights to intelligently manage their marketing budget, 80 percent of which is digital. And G Suite tools Gmail, Docs, and Drive provide the team with “a super efficient way to collaborate and get things done.”

Today, Two Marines Moving provides quality, trustworthy moving services to customers up and down the East Coast. They’ve opened a second location in Miami and are continuing to grow at an annual rate of 50 percent. Inspired by this growth, Nick aims to further expand his operations and create job opportunities for 500 veterans in the next five years.

“Veterans will always have a home here. We will always find work for them to do at Two Marines Moving,” he vows.

How Seasonal Financing Can Benefit Your Business 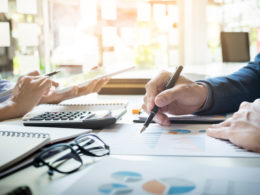