Entitlements: How to Choose a Business Title for Your Startup

“Start with this: Don’t think too much.

That’s the advice Richard Arnold offers first when it comes to choosing job titles for startups. As owner (his title) of Key Concept Services, Inc., in Atlanta, Ga., Arnold has a small cadre of business consultants who help companies with organization and procedure development.

“A new business should stay away from titles like CEO and COO. President and owner work just fine,” says Arnold, whose SendOutCards team keeps businesses in constant communication with their customers through greeting cards and postcard messages.

For James Lim, founder and interim CEO of Haamonii Smooth, titles reflect the potential growth of his company. “Your title should not only fit your current role, but also your future role,” says Lim, whose San Francisco-based company is introducing the world’s first ultra premium shochu, a distilled rice liquor similar to vodka. “By giving myself the interim CEO title, I show to investors that I realistically recognize my role in the business as founder, but not the CEO.”

What may seem like incongruous advice from these two entrepreneurs isn’t at all. Each one is demonstrating that titles need to be consistent with a company’s goals and objectives. The title of owner is very appropriate for a business, like Arnold’s, that deals directly with clients. “My experience is most people you build business relationships with over the long haul could give a crap about what your title is,” he says.

In Lim’s case, he hopes to expand his product from local to nationwide distribution, so titles are helpful to the core of his business. “When hiring someone, I like to give that person a title that’s actually slightly lower than the person’s responsibility so that they prove they actually deserve a higher title.”

In recent years, job titles have taken on more importance for many reasons. In 2004, the Fair Labor Standards Act clarified overtime pay for “blue-collar” workers, but many hourly and salaried professionals were left wondering if their job titles exempted them from overtime. Though the U.S. Department of Labor specifically notes, “A job title alone is insufficient to establish the exempt states of an employee,” it’s important to consider titles and how they may affect how employees earn their pay.

Movin’ on Up, or So It Seems

One practice that’s spread in recent years is awarding “vanity titles.” A late 2006 study by global recruitment firm Korn/Ferry International found that nearly half (46 percent) of recently promoted execs said their duties were generally unchanged despite a new title. The same study also noted the tendency of companies to award inflated titles to keep top talent.

Elliot Gordon, senior client partner of the California-based firm, says title inflation is especially evident among 30- to 39-year-old employees because these are the workers who would normally be getting promotions. But now there’s a very large group of boomers above them who aren’t all going to retire at 65. So giving out empty titles with a few added benefits may be all a company can do.

Gordon’s advice for new companies is to think beyond what you want your company to be. Think hard before you name a CFO for your from-scratch startup. If it grows just as you envision into an eight-figure powerhouse, you may need to hire a senior financial person. Where does that leave the CFO who started the company with you?

“A title should share valuable information rather than make things confusing,” Gordon says. For instance, a sales development manager and assistant vice president needs to educate his clients about the dual roles. The first describes the position; the second is rewarded to star employees and may include such other benefits as profit-sharing or more vacation time.

Job titles are often used to reflect a cultural change in a company, as when a department head becomes a mentor or a charge nurse becomes a shift leader. Avoid change for change’s sake, but if there’s truly a new level of support, then changing job titles is a very practical way to convey that message.

The Korn/Ferry survey lists workplace titles that have emerged in the last few years: Director of Decisions, Process Change Manager and Director of First Impressions (formerly known as receptionist). During the height of the dot.com era, “Creator of Cool Stuff” was not uncommon.

But the wave of slippery or overly clever job titles is seeing the tide shift back to those that convey position and authority. Like “Chief.”

Gordon says he always asks about title when questioning recruits, but spends more time asking who they reported to, or who reported to them. “There’s the title, and there’s the substance,” he says. “Chief says you are number one at the function.”

Alice Rhein is a freelance writer for StartupNation.

Thank goodness for my wife!

The demand for workers is high, Jeff Sloan says in today's Business Beat. Michigan can expect high participation and low unemployment for teenagers compared to previous summers. Tune in below for details on how you can find a job or staff:       Tune in to News/Talk 760 AM WJR weekday mornings at 7:11... 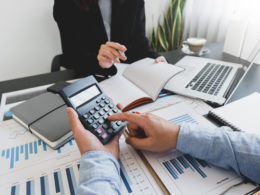 As a business owner, you likely want to do whatever you can to keep your company’s finances in check. This is why it’s imperative to work with an accountant that you can trust and count on to maximize your enterprise’s financial health. Whether you have an in-house bookkeeper or you outsourced all of your bookkeeping...