From Farm-to-Fork – The local food movement is in full force. Dan Carmody, President Eastern Market Corp and Chef Rennie from 12 Farms in New Jersey share with the local business owners what Farm-to-fork means to your business and its impact on your community. 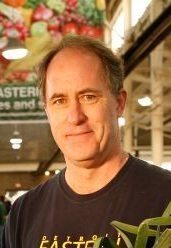 Dan Carmody’s 30-year career in downtown and neighborhood revitalization began in 1977 in Rock Island, Ill. where Carmody grew Renaissance Rock Island from a staff of one and a half and a budget of $70,000 into one of the Midwest’s leading community-based development organizations. At the time of his departure in 2005, staffing had increased to 14 and the annual operating budget exceeded $3 million. Since 2007, Carmody has served as president of Detroit’s Eastern Market Corporation (EMC) where he leads the nonprofit charged with converting one of Detroit’s most venerable institutions into one of the nation’s most comprehensive healthy metropolitan food hubs.

Rennie first learned to make pasta as a child, under the guidance of his Italian mother, Mariapia. With her, he learned how to make everything from scratch, as well as tend the ample family vegetable garden that fed them. This was Rennie’s original farm-to-table experience!

To pay his way through college, Rennie worked in various restaurants. He loved all of the different roles: from waiter to expediter to sous chef. From this experience, he knew someday he would open his own restaurant. In 2013, Rennie graduated from (ICE) Institute of Culinary Education in Manhattan. He also won the ICE Leadership Award. Also in 2013, Rennie fulfilled his internship with the exquisite Al Di La Trattoria in Park Slope, Brooklyn. 12 Farms is Rennie’s first experience owning a restaurant.

The local food movement exudes the entrepreneurial spirit, and it is movement that is likely going to stay a while!

Cancelled Travel Plans Can Be an Opportunity