Learn how to be creative in spotting the right funding for your small business.

Lots of people would enjoy flying in a small plane if they could be guaranteed a much safer journey. Yet the general-aviation industry never produced a plane that could come close to making such a promise-until brothers Dale and Alan Klapmeier got on the case, that is.

Their task was nearly as daunting as the Wright Brothers’ early efforts because the Klapmeiers were starting basically from scratch — and they had lots of false starts.

They started out working in their parents’ barn in rural Wisconsin. They built a plane by hand. But soon after finishing it in 1987, they realized it didn’t have all the bells, whistles, and features they envisioned. Ultimately, after years of labor, the brothers designed a prototype that they outfitted with a safety feature they believed would revolutionize the industry: a parachute that attached to the top of the plane.

"With our parachute, even if something really bad happens, it doesn’t mean everybody’s going to die," Dale says.

It took another nine years of the brothers’ diligence for Cirrus Design to get sufficient financing, federal regulatory clearance and enough interest from the marketplace to begin manufacturing their dream plane. They delivered the first one in 1999. And now their plant produces more than 550 planes a year-and they can now safely say that they have the best selling private single prop airplane on the planet-or better said, in the air.

It’s not like the Klapmeiers were writing software or coming up with a better nutrition bar. Building a new type of aircraft from the ground up was going to require big bucks. And the river of money would have to keep flowing for several years.

Like many entrepreneurs, the brothers first tapped their own savings and convinced their parents to contribute some of theirs. They scraped together a grub stake of more than seven figures. Eventually, all of them would mortgage their homes to the company.

"We sweated our decisions about every single dollar," Dale says. "Then we got to the point where everyone in our family had so much money into Cirrus that we couldn’t afford to turn back." Taking equity out of their homes and tapping friends and family money helped them through their early years. But that was a limited source of funds-not nearly the amount they’d need to grow an airplane manufacturing company.

So Dale and Alan needed to find outside sources of capital as they perfected prototypes and marketed them to the industry. "We wanted to continue to grow the company and do so at a faster rate than we could grow it ourselves," Dale says.

They began looking for individual "angel" investors who would contribute anywhere from thousands to millions of dollars each in exchange for equity stakes in Cirrus Design. The brothers’ extensive network in the industry helped turn up many angel candidates. And while the Klapmeiers were willing to pay commissions to outsiders who recruited investors, they soon realized that no one could sell their own company quite like they could.

"We learned our story really couldn’t be told by anyone else," Dale says. "So we took every opportunity we could find to get in front of anyone we could tell it to."

In fact, Alan began scouting for capital practically full time while Dale kept product development going. And by the end of the ’90s, Cirrus Design had corralled a total of about 240 individual investors who contributed a total of more than $70 million.

As big a number as that may sound, that amount still wasn’t enough to get Dale and Alan all the way to the promised land-a high volume manufacturing capability for their planes. To reach that goal, they had to attract even more serious money to the company, this time in the form of venture capital. The brothers were disgusted by the kinds of lopsided arrangements that most VC firms wanted to extract from them.

But then they got hooked up with Crescent Capital, an Atlanta-based firm that proved to be "truly interested in a partnership to grow this business over the long term," Dale says. With Crescent’s $100-milion investment, the brothers became minority stakeholders in their own company. But all their debt is paid down and Cirrus Design is profitable for the first time.

Dale and Alan’s Key Moves in financing were crucial to the survival of their company. "Each step was the right step at the right time," Dale says. "And had we not made every step we did, we could have folded."

Don’t be afraid to challenge paradigms. Existing federal safety parameters-and indeed, decades of thinking across the entire general-aviation industry-prohibited the revolutionary kind of design that Cirrus proposed. But Dale and Alan patiently convinced regulators that their old way of looking at things was wrong. And the Klapmeiers actually got the rules changed to their advantage. "We ended up with a partnership," Dale says, by returning to the idea that the Klapmeiers, pilots, and the regulators "were all after the same thing-having the safest plane possible."

Funding for female-led startups is on the upswing, Jeff reports on this Business Beat, at least in certain areas of the country. Tune in below for more good news:     Tune in to News/Talk... 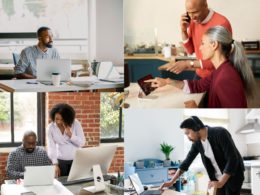 We reached out to Brianna Ellison, director of community engagement for Verizon, as part of our initiative to bring the Verizon Small Business Digital Ready program to Michigan entrepreneurs and aspiring business owners. From marketing...