What the new patent ruling means to you

One of the greatest advances born from that incredible American spirit of innovation has been the federal patent system itself. Yes, it definitely has its detractors, but overall it’s been a huge asset for this country and the opportunities for entrepreneurs here for decades.

We know first hand – we received several patents, starting with US Patent #4,902,956, that enabled us to commercialize our idea for a device to prevent dead batteries on cars, RVs and boats.

For all of you who seek to grow your small business through protectable innovations, we thought we’d update you on a very recent development in patent law (ruled on by the US Supreme Court) that may impact you.

The issue was what legal test should be used to determine if an invention is “obvious” and therefore not entitled to patent protection. Patent attorneys disagree as to how significant the impact will be to inventors and existing patents. What else would you expect?

One consistent view is that this decision will weed out the “bad patents” (or “weak patents”). The difficulty is deciding where you draw the line – especially when nobody thinks their patent is bad or weak.

Inventions are almost always a combination of known elements. It’s very rare that an invention comes along that’s so unique that it seems to have fallen from heaven down to planet earth. Just consider the light bulb, computer chip, jet engine, and a few others that quickly come to mind.

Most inventions, unlike this auspicious list, are simply improvements to known stuff using known elements. The legal question is whether these improvement types of inventions are really “new” and deserving of protection.

Before this week’s ruling, the standard for deciding about patent coverage was the so called “TSM test.” Basically, the TSM test says that a patent should not be granted for an invention – and should not be enforced if it was already granted – if the prior art (things already known publicly) provides the “teaching, suggestion, or motivation” to combine the elements of the invention the way the inventor did. This makes sense.

If people having only average skill in your field could have come up with your invention using only his/her average skill, why should you be given the legal right to exclude these people from simply using their average, ordinary skill? If you receive a patent for one of these very minor types of inventions, you will be able to improperly exclude others from copying you and exercising only their own ordinary skill.

The difficulty is that inventions are evaluated in hindsight (after they are invented) and hindsight is 20-20. AFTER the fact, nearly every invention seems to be merely an obvious combination of things we already knew. Is NOTHING patentable merely because a judge or some guy at the US Patent and Trademark Office says the prior art provides the “teaching, suggestion, or motivation” to combine the elements of the invention the way the inventor did. Says who?

James Lindon, Ph.D., is an avid StartupNation Community Member who frequently posts helpful advice at StartupNation under the nickname “patentandtrademark.” He’s a patent attorney with Lindon & Lindon, LLC in Rocky River, Ohio, who helped me interpret the Supreme Court ruling this week. He provides this additional perspective:

“The case findings this week say that combining elements according to known methods is likely to be obvious when it does no more than yield predictable results. If a person of ordinary skill in the art can implement a predictable variation, and would see the benefit of doing so, the invention is probably not patentable. Moreover, if a technique has been used to improve one device, and a person of ordinary skill in the art would recognize that it would improve similar devices in the same way, using the technique is obvious unless its actual application is beyond that person’s skill. Before this case, inventors could look outside their art to get ideas for improvements that were more likely patentable. This seems to be less likely now.

The decision also says that it is common sense that familiar items may have obvious uses beyond their primary purposes, and a person of ordinary skill often will be able to fit the teachings of multiple patents together like pieces of a puzzle. I don’t think this is such common sense. I think that many of the nice things we have in life are a result of creative people solving “puzzles” of one sort of another. I also believe that we should not make it easy to simply assume that problem solving and puzzle is such an easy thing that ordinary people in any given field can easily do. That seems to me to demean much of the hard work and creativity that deserves legal protection.

Some attorneys think this case really does not change much. I disagree – and hope I am wrong. Once we say that the person of ordinary skill in your field is also creative and somehow would have thought of something the same way you did, even when we can’t specifically show that, it will be harder for you to show that your invention is not obvious – and thus patentable.”

Whether this case will impact your particular invention or issued patent remains to be seen. Some things are just out of your control. Given that, and given the potential value that a protected (patented) invention can bring your small business, James Lindon’s advice – and ours too – is to keep on creating and don’t give up!

Here are a few good links for you to consider at our site to learn more about patents:

1) Article: How to patent a Product Idea

On today's Business Beat, Jeff heralds inventors as being crucial to the entrepreneurial community and a bedrock of American ingenuity. Turn in to the Business Beat, below, to learn more about the role of the U.S. Patent and Trademark Office:   Tune in to News/Talk 760 AM WJR weekday mornings at 7:11 a.m. for the... 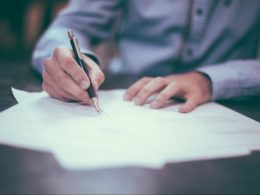 Working in a startup comes with its own set of ups and downs, but owning the creative rights to your work should not be one of them. Whether you are in the early stages of the company or have been around for a while, keeping the intellectual property (IP) at your organization’s discretion is a...

On this week's episode of StartupNation Radio, Jeff talks to three Detroit entrepreneurs: Brad Baxter and Jacob Zuppke of AutoPets and Doug Schwartz of Detroit Wick and Trip Wipes. StartupNation exclusive discounts and savings on Dell products and accessories: Learn more here Tune in to the full StartupNation Radio show with Baxter, Zuppke and Schwartz...