Todd Connor
Founder at Bunker Labs
Todd Connor is a widely sought-after speaker, thought leader, and consultant who leads individuals and organizations to unlock their full entrepreneurial potential. Todd is the founder of Bunker Labs, a national entrepreneurship organization with chapters in 30 states across the U.S., which works with military veterans and military spouses who want to start their own business.

He is also the founder of The Collective Academy, Emerson House, as well as other for-profit and philanthropic organizations.

After serving as an officer in the Marine Corps, I launched my first venture, which was a free boxing gym for inner-city youth and young adults in Newark, New Jersey, called the IRONBOUND Boxing Academy. I was working full-time at a private school in downtown Newark, lived on campus and oversaw a residence hall of more than 70 teenage boys, and I was also a graduate student pursuing my master’s degree in American Studies from Rutgers-Newark.

From October 2016 to the summer of 2018, my life consisted of work, school and boxing. I was the epitome of the Third Shift Entrepreneur, only I didn’t know it at the time. In June 2018, with a nudge from my own Third Shift Entrepreneurial community known as Bunker Labs, a veteran nonprofit organization that helps people start businesses, I left my job to pursue IRONBOUND Boxing full-time.

For the past two years, I’ve taught boxing to CEOs in the NYC Metro Area, served as a part-time consultant supporting veteran entrepreneurship initiatives, and moonlighted as a brand strategist with an e-commerce coffee company based in Atlanta. I even managed to launch my own podcast called “Confessions of a Native Son.”

If there’s anything I’ve learned along the way, it’s that it’s time for a new playbook for entrepreneurs. Too often we create myths around entrepreneurship and tell stories of Harvard dropouts who make their way to Silicon Valley. That thinking and those stories leave the vast majority of us out.

Starting your own business takes more time, money, and effort than you expect, and especially so because a lot of that time, money, and effort is spent on the wrong things. Before you waste money, rack up tons of debt, or step into the unknown, I encourage you to understand and embrace a Third Shift Entrepreneur mindset. The sad reality is that the majority of business literature today doesn’t accurately reflect the vast landscape of our American identity, particularly for minorities. There are socioeconomic and racial disparities among our society, which have left out many groups from business ownership. If we’re going to overcome them, we need new frameworks and playbooks.

There’s nothing more freeing than being able to generate income for yourself and your loved ones as an entrepreneur. You unleash untapped power and confidence in yourself when you’re able to come up with an idea for a product or service and monetize it. The entrepreneurial journey is one of the most rewarding experiences—a true act of realizing your full potential. I believe everyone who has the aspiration should have the opportunity, and my hope is that the strategies in the following pages reveal an approach that will allow you to do so. This is a book, in essence, that creates a pathway to entrepreneurship for the rest of us.

Related: 5 Things Veterans Should Know About Starting a Business

It is a false and dangerous narrative that we have to “risk it all” in order to find our calling in life, or worse yet, take our dreams to the doorstep of Silicon Valley or the audition halls of “Shark Tank” hoping for a big, lucky break. You can in fact build your dream job while keeping your day job, and for the vast majority of us, if we want to pursue starting our own business and living out our calling in life, that is how we will have to do it.

Now, more than ever, I feel an urgency for people to define their own futures and to create a playbook for historically excluded populations to pursue entrepreneurship on their own terms. Only about 20 percent of venture-backed companies have a female founder, and only about one percent have a Black founder. We must do better.

The mythology and assumption that starting a business requires outside capital, a polished pitch deck, and time in accelerators is not true. Those things represent the scaffolding for a specific kind of business and a specific kind of game. A game, frankly, that has been engineered by highly resourced investors to create efficiency for their investments and, yes, to scale specific sorts of technology-driven businesses. But that is a game that is engineered for unicorns, and most of us are not trying to be unicorns. It is not the playbook for entrepreneurship; it is very specifically a playbook for Silicon Valley. This is about real people finding real success and pulls from the stories of entrepreneurs I have known, coached and learned from.

There is so much more you can do right now, being exactly who you are, working with exactly what you already have. Don’t wait. We need your ambition to come forward and for you to take the specific steps to bring your ideas to light, invite customers into the process, and begin the micro-movements that collectively can put your life on a wildly different trajectory.

This is a playbook for the rest of us: military veterans, women, black and brown entrepreneurs, first-generation entrepreneurs, entrepreneurs from rural communities and small towns, LGBTQ entrepreneurs, low-income entrepreneurs, nonprofit entrepreneurs, and even just good-hearted and ambitious people who may not want to start businesses but want to take action to live a more purpose-driven life. The principles and strategies work. I’ve seen it in my own life and in hundreds of others.

“Third Shift Entrepreneur” is available now wherever books are sold and can be purchased via StartupNation.com.

Author
Todd Connor
Todd Connor is a widely sought-after speaker, thought leader, and consultant who leads individuals and organizations to unlock their full entrepreneurial potential. Todd is the founder of Bunker Labs, a national entrepreneurship organization with chapters in 30 states across the U.S., which works with military veterans and military spouses who want to start their own business. He is also the founder of The Collective Academy, Emerson House, as well as other for-profit and philanthropic organizations. For speaking requests, access to additional thought leadership, or to attend Third Shift Entrepreneur workshops visit https://thirdshiftentrepreneur.com/.
Comments by Vanilla
Previous Article

The Future of Work: Study Shows 91 Percent Would Prefer to Continue Working Remotely 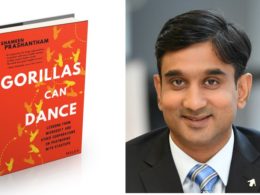 This excerpt is adapted from “Gorillas Can Dance: Lessons from Microsoft and Other Corporations on Partnering with Startups” by Shaheen Prashantham. ©2021 and is reproduced with permission from Wiley.   Understanding the startup's perspective Of course, it takes two to tango, and the three-step (synergy-interface-exemplar) process just described will only work when the managers involved take...
This website uses cookies to improve your experience. We'll assume you're ok with this, but you can opt-out if you wish. Cookie settingsACCEPT
Privacy & Cookies Policy