4 Reasons 2022 Will Be A Turning Point For Startup Funding

Miguel Fernandez
Co-founder and CEO at Capchase
Miguel Fernandez is the co-founder and CEO of Capchase, a provider of non-dilutive growth capital for recurring-revenue companies. Prior to founding Capchase, Miguel was a student at Harvard Business School and played a pivotal role in the growth of Geoblink, a location intelligence company based in Madrid. Miguel is also the founder of HeyDey Brands and was a strategy consultant for Monitor Deloitte. Originally from Madrid, he has also lived in Munich and London.

Last year saw some fundamental shifts in the startup funding landscape that will have a profound impact by this time next year. Interest rates were at an all-time low, which meant that there were few asset classes providing high returns (venture capital [VC] being one of the main ones). Vast sums of money poured in from investors, which led to more than $600 billion being deployed in the industry. This meant there was more money than ever chasing the same opportunities, which translated into sky-high valuations. Every additional proof point of traction could lead to tens of millions of valuation at the time of a round.

As a result, startup founders began to reevaluate their financing options – bringing light to entirely new ways of funding a business. Not to mention the impact of COVID. The global pandemic gave certain businesses a run for their money, but it also delivered the unexpected upside of opening founders’ eyes to new ways of securing capital.

The traditional routes of VC funding and institutional lending are well trodden and still have their place, but the range of available options that require far less dilution and deliver far more flexibility are growing at warp speed. Additionally, now that interest rates are poised to increase, growth valuations will probably cool down. This means that companies will need to go the extra mile to grow into the high valuations they raised at and prove strong fundamentals to raise at a higher valuation in the future. Every business is thinking about how to grow faster, for longer, without needing to raise capital.

If this trend continues (and our own company growth and customer acquisition figures certainly suggest it will), I’m confident 2022 will be the year that ‘Alternative Financing’ becomes, simply, financing.

In the past year alone, we’ve worked with thousands of companies and deployed hundreds of millions of dollars in funding to fast-growing recurring-revenue startups. We’ve seen firsthand how these companies have navigated financing options, and the impact that the right kind of funding can have on a business’s success. With this experience in mind, I predict 2022 will be a significant turning point in startup funding for these four reasons:

Unicorns will start to lose their sparkle

It’s easier than ever to bootstrap a business today. 2021 saw a clear pickup in other exits – with M&A on the rise and continuing to break records. Startups are no longer single-minded with their eyes set on the unicorn prize. Other exits are becoming more attractive, thus depleting the unicorn pool.

Additionally, VC money is now more expensive than ever before. Last year witnessed the biggest investment in startups ever, by size of investment – not by number of deals. Mega deals became very attractive (and subsequently super competitive for startups to achieve). As the returns in VC grew greater and greater, so too did the cost of that financing and the impact on founder equity.

This led a lot more people to abandon the VC route, either because they didn’t want it, or simply couldn’t afford it.

The Unicorn Is Dead, Long Live the Thoroughbred

Funding will be embedded

Funding is going to become embedded, recurring and programmatic as it gets integrated into other parts of a startup’s financial stack. For example, unused funding will be able to generate interest within the startup’s bank account, helping to further reduce the cost of capital. Finance has evolved to offer a better way for financing startups, beyond the binary choice of VC funding or bank loans/debt. Though both forms absolutely have their place, new and complementary methods can now enable startups to get decent returns on that surplus cash and access capital quickly and easily when it’s needed.

Similarly, large business expenses should not impede growth plans. Alternative financing has evolved to enable startups to spread out large expenses such as marketing, legal and software services over up to a 12-month period. This enables startups to set their own payment schedules and prioritize critical growth initiatives. When combined, these unique financing methods work together to make financing more efficient, while at the same time reducing the total cost of capital.

From VC to DeFi: 6 Realistic Ways to Fund Your Startup in 2022

Financing will be more frequent, for lesser amounts

Given the rise in VC mega deals and the impact on equity, I believe we will see a counter trend of founding teams going for more funding rounds for lesser amounts in an effort to reduce dilution.

In this way, funding will become more programmatic, requiring less time and effort than in previous years.  In our experience, a lot of companies find it very challenging to raise money. They may not have the established network of contacts, or simply don’t have the time required to fundraise, which can in turn make the entire effort polarizing.

As funding shifts to a more frequent and less dilutive exercise, founders will be able to focus on what really matters – growing their business.

2021 was the year that vertical players became prevalent. This trend will continue in 2022, delivering a very broad wave of financing.

The API economy now enables access to data that was very hard to obtain in the past. This newfound access to data means we are now able to draw on historical data in order to make predictions about the future. SaaS products that aggregate data and automate workflows and marketplaces can use the data generated or stored in these platforms to predict future performance and thereby underwrite financing in a more intelligent way. You can see examples of this happening everywhere: from financing for Airbnb hosts based on their past visits frequency and scores to financing for Uber drivers to acquire new vehicles based on past business, scores and tips to even financing for electric bike fleets based on rides/mileage per day.

These verticals players will come to compete against banks by having better contextual data and their ability to benchmark against thousands of comparable borrowers in an instant. Going one step further, these same players will begin to bundle financial and software products into a single package and simple pricing in an effort to differentiate themselves.

Ultimately, if I could give founders one piece of advice based on our collective insights from our customers – as well as our own growth – the best path to success in 2022 will be taking advantage of alternative forms of financing that put you in the best position to raise capital. While VC dollars certainly have their place in the funding lifecycle, it’s always best to grow fast and raise later if you want to maintain the most amount of equity. And as a founder – don’t we all?

Raising later is always better and will deliver the best opportunities for your business. Focus on the economics and metrics now – ensure you have the right product market fit and a clear value proposition, not on your funding.

And once you’re in a strong position to raise outside capital, don’t sell yourself short. One mistake we often see founders make when trying to raise capital is they underestimate how much leverage they have over VCs. Power economics have changed between VCs and companies. VC money will be the most expensive money you’re going to get in the world, so you better get something out of it. People aren’t leveraging enough and should think hard about what they need and want to deliver success in 2022.

Author
Miguel Fernandez
Miguel Fernandez is the co-founder and CEO of Capchase, a provider of non-dilutive growth capital for recurring-revenue companies. Prior to founding Capchase, Miguel was a student at Harvard Business School and played a pivotal role in the growth of Geoblink, a location intelligence company based in Madrid. Miguel is also the founder of HeyDey Brands and was a strategy consultant for Monitor Deloitte. Originally from Madrid, he has also lived in Munich and London.
Comments by Vanilla

Funding for female-led startups is on the upswing, Jeff reports on this Business Beat, at least in certain areas of the country. Tune in below for more good news:     Tune in to News/Talk...

We reached out to Brianna Ellison, director of community engagement for Verizon, as part of our initiative to bring the Verizon Small Business Digital Ready program to Michigan entrepreneurs and aspiring business owners. From marketing... 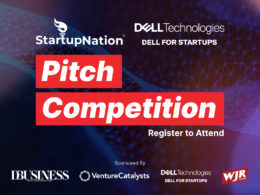 Register NOW for a Pitch Competition and Day of Networking