Entrepreneurship is About the Journey, Not Just the Destination 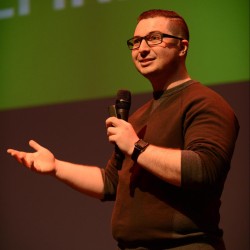 Joshua H. Davidson
CEO at ChopDawg.com
Joshua has been working since he was 16: first as an entrepreneur, then as a business advisor, writer, speaker, and most recently as a nationally-syndicated radio and podcast host. Today, he runs a full stack design and development team based throughout the U.S. that is a "Temporary CTO + App Development Team for Hire" for companies. To date, Joshua's company, Chop Dawg, has been the driving force behind more than 200 new product launches and businesses.

The following is excerpted from “The Entrepreneur’s Framework: How Businesses Are Adapting in the New Economy,“ available at select bookstores and on Amazon, in paperback and for the Kindle. All proceeds from book sales are being donated to the Big Brothers Big Sisters in Philadelphia, PA.

Without a doubt, fear keeps the wantrepreneur from finding out what they don’t want to know. If they’re going to put in the work, shouldn’t the outcome be guaranteed to be a good one? They don’t even want to imagine that failure could be in the cards. In reality, though, entrepreneurs experiment all of the time and fail on many things before landing on something that could be a success. To the wantrepreneur, that seems like a grind. The entrepreneur figures out how to give something their best shot.

It’s also not the only way you can learn how to start a business or get a job. Not even close. In reality, if there’s one thing being an entrepreneur has taught me, it is that no two people learn in the same way. So many people learn in different, unique ways. Yet through traditional schooling, I see an attempt at a one-size-fits-all approach to education (although I do hope that, one day, technology will change this). It’s the building of the herd mentality when you think about it, which is another reason why the “calling of the herd” producing big numbers makes sense to me. Today, many entrepreneurs ascribe to the Silicon Valley-style of entrepreneurship in a similar way.

Related: From Waiting Tables to 7-Figures: Rich20Something on the Entrepreneurial Journey

In contrast, true non-herd entrepreneurship requires you forging your own path, which can be uncomfortable, especially because you may not even know how you learn best yet. You may also lack the objectivity and supportive community to find the best learning path for yourself.

I asked my friend Christie Pitts, general partner of the Backstage Capital investment firm, about how entrepreneurs can become more objective. Before Christie joined Backstage Capital, she served as Verizon Ventures’ development manager.

“A great way to attain objectivity is to consider multiple perspectives. It’s important for entrepreneurs to have a circle of people whom they trust and who can provide them with honest and candid feedback.”

Finding the thing that is just right for you is, I hate to say, pure trial and error. This trial-and-error process becomes so much easier when you have a circle of people who can give you sound advice, help you become more objective, and act as your mentors along the way.

You’re probably not going to want to stick with the first opportunity that you’ve identified for yourself. I mean, look at me as an example. I started Chop Dawg as a website design company (more as a website design freelancer in the traditional sense) before it became the technology partner and app development agency that it is today. But when you identify a new opportunity that later turns out to be much better, your wiser self will thank your past self for not settling on anything. What makes this process fun is the natural desire to learn about how things in the world work.

I think it’s the lure of getting caught in the idea high that stumps wantrepreneurs the most. They don’t want to figure out how to prove their concept and instead keep cuddling up with their assumptions.

That leads to failure.

So before you go all in on your next idea, ask yourself these questions:

Find your answers to these questions. You need them to make your ideas a reality. Once you’ve thought this through, go all in and immerse yourself in this new idea for as long as it takes you to figure out whether you should go to the next step or just move on. Know that along the way, you’ll deal with the fear of loss, rejection, destitution, embarrassment, you name it.

Entrepreneurship truly is about the journey and not just the destination.

“The Entrepreneur’s Framework: How Businesses Are Adapting in the New Economy” is available now at fine booksellers and can be purchased via StartupNation.com.

Author
Joshua H. Davidson
Joshua has been working since he was 16: first as an entrepreneur, then as a business advisor, writer, speaker, and most recently as a nationally-syndicated radio and podcast host. Today, he runs a full stack design and development team based throughout the U.S. that is a "Temporary CTO + App Development Team for Hire" for companies. To date, Joshua's company, Chop Dawg, has been the driving force behind more than 200 new product launches and businesses.
Comments by Vanilla