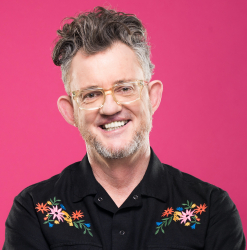 Michael Bungay Stanier
Michael Bungay Stanier is the author of six books, which between them have sold more than a million copies. He’s best known for "The Coaching Habit," the best-selling coaching book of the century and already recognized as a classic. Michael was a Rhodes Scholar and plays the ukulele badly. He’s Australian, and lives in Toronto, Canada. Learn more at MBS Works.

This excerpt is adapted from “How to Begin: Start Doing Something That Matters” by Michael Bungay Stanier  ©2022 and is reproduced with permission from Page Two.

It’s Hard to Be Ambitious

I’m in my fifties, and one of the small but insulting ways my body’s aged is that my eyesight’s warped. I now spend too much time figuring out focal lengths, calculating… Should I be wearing regular glasses? Try to find my reading glasses? Dig out my contact lenses? Or maybe keep doing the squinty-hunch thing without any glasses at all?

Targeting our ambition can be like that: about to come into focus, before getting fuzzy again. It’s hard to pin down because it is so often a slippery combination of exclusive, illusive, and elusive.

Exclusive, because it can seem that ambition is only for those people who’ve been dealt the cards of privilege. I’m one of them, as it happens, and I’d say that, even with the hand I’m holding, it can still be a struggle at times. It’s harder still if you don’t have those cards, and that means…

It’s harder if you’re not male.

It’s harder if you’re not white (at least in North America and Europe).

It’s harder if you’re not cis and heterosexual.

It’s harder if you don’t have a “tribe.”

It’s harder if you’ve had a disrupted childhood.

Illusive, because we’re living at a time when the bling of self-centered accomplishment seems bigger and shinier than ever. Social media is filled with highlight reels. Whatever your dreams, you can find someone to envy: more stuff, more reach, more power. If this type of success is all you pursue, beware: when you reach the top of your mountain, you will discover it’s not the peak you hoped it would be.

Elusive, because even if you can own your ambition and ensure it serves both you and the world, it can still be hard to articulate. You need to hold on to what you’d like to achieve, who you’d like to be, and how you might be a force for change.

Where are you now?

Take a moment to gauge what might get in the way of you claiming your ambition. There’s no wrong answer here, it’s purely to help you see where you stand.

Wherever you are, that’s perfect. Because no matter where you are, now can be a time to find and refine your Worthy Goal.

“Set a Worthy Goal.” Sheesh. Worthy is a big word. It can feel a little… earnest. Perhaps a little high and mighty. You might be thinking, “Who am I to be measuring things on a level of worthiness?” But “worthy” is less about an abstract moral rating and more about whether it’s worthy enough for you to be committing to it.

Worthy becomes more accessible as a standard when you understand its three different elements: Thrilling, Important, and Daunting. They’re the primary colours that allow you to paint the picture of your ambition. If you have all three of these in a goal or a project, you’ve got something intriguing on your hands.

The idea of taking this on gets you going. You’re excited about this, not just in theory but in real life. Thrilling means something to you. It speaks to your values and lights up your receptors. It makes you rub your hands together and think: YES! This! You’d be proud to do this. It’s cool, fun, bold. It’s an adventure you want to have.

Thrilling is a countermeasure against a sense of obligation. The tendrils of expectations—others’ and our own—can keep us rooted to the spot. “I should be doing/wanting/achieving/claiming this…” is a heavy stone that many of us carry.

In Jacqueline Novogratz’s wonderful book A Manifesto for a Moral Revolution, she lays down the challenge to “give more to the world than we take.” Important connects to that. It’s a project or a goal that’s for a bigger win than just self-satisfaction or self-gratification. The stakes are higher than your life.

Part of the power of Novogratz’s phrase comes from its scalability. You’re giving more to the world than you’re taking if you’re working on a key relationship at home, cracking that challenging work project, starting a book or podcast, going back to school, starting a neighbourhood group, beginning as a solopreneur, protesting against injustices, inventing technologies, or a thousand thousand other Worthy Goals.

Important is a countermeasure against selfishness. I’m all for investing in yourself, personal exploration, and growth, but for the most part, “self-help” is not sufficient to create a better world.

With Daunting, when you think about taking this on, there’s a flutter in your heart (or your stomach, or your shoulders, depending on where you show tension). It doesn’t feel utterly impossible, nor is it immediately obvious how you’re going to get going on this or finish it. If the thought of taking on this goal makes you just a little bit sweaty, then you’re nudging up to Daunting in an interesting way.

I jiggle my right leg when I’m feeling under pressure. I can trace it back to the experience of learning piano with Mrs. “Knuckle-rapper” Birmingham. On the upside, my “Für Elise” still holds up 40 years later.

Daunting is a countermeasure against the comfort zone. Endless influences encourage you to grind it out, play it safe, and keep it small. Daunting helps banish those by inviting you back to the learning edge.

Two out of three?

What if your Worthy Goal ticks only two of the three qualities? Isn’t that close enough? Well, it might be. But like a three-legged stool with one leg shorter than the others, it’s probably usable but slightly precarious.

There’s a helpful tension between Thrilling and Important. They’re two hands stretching a rubber band. In that state, there’s dynamic potential. But let one of them go, and the potential is lost.

Here’s how the interactions play out:

Important and Daunting but not Thrilling

This Worthy Goal will feel a little too obligated. It’s worthy work that stretches you and contributes to a better world, but it doesn’t nourish you and isn’t interesting enough to sustain you. There’s the danger of burnout here.

Thrilling and Daunting but not Important

This Worthy Goal will feel a little too self-centered. It’s exciting work that will stretch and grow you, but the “why” of the work is for you rather than also contributing to others. Don’t write off small, more intimate, personal projects… but do find a way to connect them to the wider world. There’s a risk of “Why bother?” here.

Thrilling and Important but not Daunting

This Worthy Goal will feel a little too comfortable. It’s solid work and might have once stretched you, but now you’re in cruise control. You might start to stagnate if you stay here too long.

This is adapted from Michael Bungay Stanier’s new book, “How to Begin: Start Doing Something That Matters.”  You can purchase it anywhere books are sold, and pick up bonuses at HowToBegin.com

“How to Begin: Start Doing Something That Matters” is available now and can be purchased below via StartupNation.com.

Author
Michael Bungay Stanier
Michael Bungay Stanier is the author of six books, which between them have sold more than a million copies. He’s best known for "The Coaching Habit," the best-selling coaching book of the century and already recognized as a classic. Michael was a Rhodes Scholar and plays the ukulele badly. He’s Australian, and lives in Toronto, Canada. Learn more at MBS Works.
Comments by Vanilla