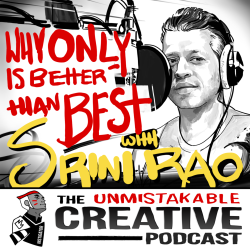 Srinivas Rao
Host and Founder at Unmistakable Creative
Srinivas Rao is the author of "Unmistakable" and the host and founder of the popular podcast, Unmistakable Creative, where he's interviewed over 500 creative people. Former guests of the show include Seth Godin, Elle Luna, Tim Ferriss, Gretchen Rubin, Simon Sinek, Adam Grant and Danielle LePorte. His self-published book, "The Art of Being Unmistakable," was a Wall Street Journal bestseller.

The excerpt below was selected specifically for StartupNation’s audience from “UNMISTAKABLE: Why Only Is Better Than Best,” by Srinivas Rao, host of popular podcast the Unmistakable Creative, with permission of Portfolio, an imprint of Penguin Publishing Group, a division of Penguin Random House LLC. Copyright © Srinivas Rao, 2016.

Those who choose to follow a map buy into the seductive promise of best practices. An individual or organization produces an outstanding result of some sort. They distill that result into a few key elements and package it up as a series of best practices, a how‑to book, or a case study. MBAs, marketing managers, and other business professionals study these best practices in the hope that they might replicate some of the results.

Many of these so‑called best practices would be more honest if the following disclaimer preceded them:

Best practices and rules that people follow are inherited and thrust upon us. If we start to ask why things are done a certain way, threads start to unravel. What we often discover is that the only reason things are done a certain way is because they’ve always been done that way. In 1999 Shawn Fanning ignored all best practices when he created the music downloading application Napster. The music industry fought him and Napster, partly because it existed outside of best practices. The way things were always done is now the ghost we remember of what the music industry used to be, turning it into a cautionary tale. Tradition is a stupid reason to continue a best practice that produces suboptimal results.

In my personal experience at Pepperdine’s MBA program, and looking at the course offerings of other business schools, they haven’t updated curricula in decades even though they clearly need to do so. The traditional career path— get straight A’s, go to college, and find a job— has been dismantled before our eyes, yet people are still doing it the same old way, which leads to mountains of student debt instead of pinnacles of success. Similarly, the eight-hour workday is a product of the Industrial Revolution and is still integrated into many organizations, though most people no longer even work in factories.

Best practices are a perfect cop-out. They let you off the hook. If what you tried doesn’t work, then you can blame the system, the manual, or the author who wrote the book. When you take the risk to make something unmistakable, there’s nobody to blame. You come up with the ideas and push boundaries, so you get all the credit when the work is incredible but all the blame when it falls short. But the price of playing it safe is that your work will become nothing more than a sad imitation of what’s in the instruction manual, another case study to exemplify why everyone else in the future should follow this established best practice. In the words of cartoonist and author Hugh MacLeod, the Web has made kicking ass easier to achieve and mediocrity harder to sustain. By following best practices, we limit the potential outcomes of our work, increase the likelihood of mediocrity, and decrease the possibility of unmistakable.

Designer and writer AJ Leon and his band of misfits broke all the rules of conferences. Instead of holding their Misfit conference in a big city or central hub, they get together in Fargo, North Dakota. Instead of choosing a lineup of giant keynote recognizable names, they invite speakers who are up to something fascinating and making a mark in the world. Instead of selling as many tickets as possible, they limit each conference to less than fifty attendees. These principles go against almost every best practice for planning a conference. The result is an unmistakable experience that people can’t get enough of, and no alternative or anything you can compare it to. People go to Misfit because they want to have that experience.

I came face to face with best practices in the process of designing the Unmistakable Creative Web site. My mentor Greg Hartle and I started by asking who else had a really great “About” page, both for inspiration and to learn what we wanted. It wasn’t until we shut down our laptops and ignored all the best practices for creating a company “About” page that our best ideas started to emerge. Our “About” page at UnmistakableCreative.com is a cartoon— as you can imagine, no article we read about branding and “About” pages suggested this, but it fits our brand. If your company’s “About” page is a summary with a series of headshots of executives (which is about 90 percent of companies), you might considering asking yourself, “How can we make it unlike any other ‘About’ page we’ve ever seen?” And to get started, shut down your laptop and let your imagination run riot.

By combining various art forms— the violin, choreography, and film— and ignoring best practices, Lindsey Stirling has redefined the standards of what’s possible in the career of a violinist. Juilliard is probably not teaching Lindsey Stirling’s approach to art in its classrooms, but more than 100 million people have watched several of her videos on YouTube— and her art is certainly unmistakable. As a result of combining all three art forms, she has made her competition irrelevant.

In business, Basecamp cofounders David Heinemeier Hansson and Jason Fried broke nearly every rule of building a successful software company. Ironically, they rewrote the best practices by breaking the rules. They write one-page proposals instead of ten-page business plans. Their team is scattered across the world rather than everyone working nine to five in one office together. Meetings are seen as toxic to their culture.

The result is a successful organization that has made millions of dollars and created millions in value for their customers.

“Unmistakable: Why Only is Better Than Best” is available today wherever books are sold. Order your copy here!

Author
Srinivas Rao
Srinivas Rao is the author of "Unmistakable" and the host and founder of the popular podcast, Unmistakable Creative, where he's interviewed over 500 creative people. Former guests of the show include Seth Godin, Elle Luna, Tim Ferriss, Gretchen Rubin, Simon Sinek, Adam Grant and Danielle LePorte. His self-published book, "The Art of Being Unmistakable," was a Wall Street Journal bestseller. For more information, visit www.unmistakablecreative.com.
Comments by Vanilla