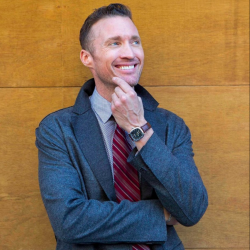 Ryan Blair
Founder and Partner at HashTagOne
Ryan Blair is a serial entrepreneur who established his first company at age 21. He has since created and actively invested in multiple startups. As the CEO of ViSalus Sciences, he took the company from $600 million in revenue to more than $1 billion in sales and was named Ernst & Young's 2012 Entrepreneur of the Year. His first book, "Nothing to Lose, Everything to Gain," was a number one New York Times bestseller. He lives in Los Angeles.

The following excerpt is adapted from “Rock Bottom to Rock Star: Lessons from the Business School of Hard Knocks” by Ryan Blair, in agreement with Portfolio, an imprint of Penguin Publishing Group, a division of Penguin Random House LLC. Copyright © Ryan Blair, 2016.

I get asked this question all the time: Knowing what you know now, what would you tell your younger self? My answer: Pay attention to your time… line. Your time is what you do today, this weekend, this month, and your timeline is the accumulation of what you’ve done for many years. The things I’m making real money on today, I started working on many years ago.

For instance, I started my real estate career as a “boy Friday” for my stepfather in 1996, and today I am making millions in real estate. When I was a teenager, I became obsessed with comput­ers; in 2008 I created a piece of software that did $70 million in revenue for our company. Today, I invest in software startups. The first time I tried my hand at public speaking I was about twenty ­five and there were no more than ten people in the room; in 2012, I spoke to eighteen thousand people in a sold­ out American Airlines Arena.

Get the point? What you do with your time today makes a big difference down the road. So, pay attention.

I used to be a sports fanatic. I would watch every NFL game, every NBA game. Football, soccer, tennis—I’d watch any sport out there, and I’d have my fair share of drinks while I was at it. That’s the middle ­class pastime, and that was my thing. One day, when I was about twenty­ one, I asked myself, How is this going to make me rich? The answer was: It’s not. Not unless I plan to own a sports team.

Today, I’ve all but dropped sports. I know that when I invest my time watching all these games, I’m making someone else rich. Time is a nonrenewable resource; once a moment is gone, it’s gone forever. As a successful businessperson, you’ll have to carefully examine your hobbies, your obligations, your pastimes, and all your other preoccupations to isolate the ones that waste time and pull you away from your business. Ideally, you’re going to completely change the way you look at the twenty­ four­ hour clock and live nearly 100 percent of it intentionally.

For example, I don’t waste my weekends watching sports, but I still love football, so I throw a Super Bowl party. I invite a variety of current and potential business partners, and we have a great time. Many times, I’ll put a bucket at the door so every­ one can drop cash into it; after the game, we donate the money to a charity. That way, I’m mixing business with pleasure, and I’ve enhanced both my life and my business.

Maybe you’re a golfaholic—you can afford to play golf three times a week, but you’re stuck in the middle class. Unless you’re really utilizing the networking benefits of rubbing elbows with investors and clients on the green, drop the golf altogether and make a promise to yourself that you’ll pick it up again once you are wealthy.

Watching television or voraciously reading novels is the same time waste. You don’t have to give up those things; you just have to adjust the way you spend your time so that you can focus on things that will help your business in some way. If you want to read, read for profit. You like movies? Watch a movie that will give you a new perspective on your career or inspire you. I read news articles, business books, and motivational stories. If you want to watch TV, choose a documentary or a film that piques your creativity. It’s all about living with intentionality. There is a way to shape everything in life so that it serves you and drives you toward success.

One life­hack I recently made was to work out while I work. An exercise bike is perfect for that; I’ll read or send e­mails or make calls while pedaling. A treadmill is a little less desirable because it’s harder to send out a coherent e­mail when you’re running, but you can certainly listen to an audiobook while run­ning. Sometimes, the gym doesn’t inspire me, so I’ll go for a hike, and that helps me to clear my head. I also use hikes as an opportunity to interview prospective employees and entrepreneurs I’m considering investing with, or simply to talk with a colleague.

For instance, Lewis Howes reached out to me the other day and requested an interview. This is an author with one of the largest podcasts in the world right now (three million down­loads a month), who frequently interviews business leaders, athletes, and other rock stars. Originally, we planned to do the interview over the phone, but the connection kept breaking up. Finally, Lewis said, “Hey, why don’t I just come to you?”

I said, “Deal, but the meeting has to be at my house—after a hike.”

Not only did we get a great interview that day, I felt like I got to know him. During the hike we became friends. Later, when he was writing “School of Greatness,” Howes contacted me again and we got a chance to talk about business. Business Insider even wrote an article about Howes and me working out together and how I use hiking as a tool to optimize my time.

The objective is to practice restraint, and to become intentional in all your actions. The more I grow as an entrepreneur and especially as a father, the less time I have to waste. I’ve been in every socioeconomic class in America—poor, middle class, and wealthy—and it’s actually easier to be ambitious when you’re living poor or paycheck ­to ­paycheck. You’re in survival mode, and every second counts—you’re likely not taking “stay­ cations” every other week or taking off an entire afternoon to watch football. You have to grind it out. You have to hustle.

The point is that no matter which class you’re starting from—whether you’re trying to figure out how to pay for your next meal or floating in the illusory comfort of the middle class— the sooner you start optimizing your time, the more successful you’ll be, and the more time you’ll have to spend doing whatever you want. Like a true rock star.

“Rock Bottom to Rock Star: Lessons from the Business School of Hard Knocks” is available today wherever books are sold.

Author
Ryan Blair
Ryan Blair is a serial entrepreneur who established his first company at age 21. He has since created and actively invested in multiple startups. As the CEO of ViSalus Sciences, he took the company from $600 million in revenue to more than $1 billion in sales and was named Ernst & Young's 2012 Entrepreneur of the Year. His first book, "Nothing to Lose, Everything to Gain," was a number one New York Times bestseller. He lives in Los Angeles.
Comments by Vanilla
Previous Article