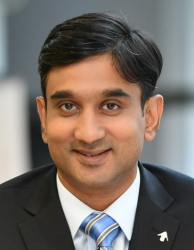 Shameen Prashantham
Dr. Shameen Prashantham is professor
of international business and strategy
and associate dean (MBA) at China
Europe International Business School
(CEIBS) in Shanghai, China. His research
focuses on what he calls “dancing
with gorillas”—how startups and large
multinational corporations partner with
each other as a means to improve their
prospects of innovation and growth.
His current focus is on partnerships
that contribute to the Sustainable
Development Goals (SDGs).

This excerpt is adapted from “Gorillas Can Dance: Lessons from Microsoft and Other Corporations on Partnering with Startups” by Shameen Prashantham. ©2021 and is reproduced with permission from Wiley.

Of course, it takes two to tango, and the three-step (synergy-interface-exemplar) process just described will only work when the managers involved take the trouble to understand the startup’s perspective (see Figure 3.1). This matters not least because “gorillas” (large corporations) are increasingly competing with each other for the hearts and minds of startups as they vie for the best new venture partners. When gorillas adopt the sort of systematic partnering discussed in this chapter it becomes more straightforward for startups to dance with them, which my research suggests involve three important steps: forming, consolidating, and extending. From the startup’s perspective each of these steps needs to combine proactiveness with caution.

Dancing with Gorillas: How Startups Partner with Large Corporations

Forming. The first step from the startup’s perspective is to conceptualize the possibility of working with a given gorilla, and to be willing to reach out to them. This means that the startup will need to envisage fairly readily what a possible win-win relationship with that particular gorilla might look like. Thus the startup’s efforts to form a relationship with a gorilla can be seen as its response to the perceived synergy that the gorilla offers its startup partners, which in turn would lead it to seek out a suitable partner interface within the gorilla’s operations.

At the same time, the startup, which is typically the less powerful actor when partnering with a large corporation, is likely to be reassured that the gorilla is in fact committed to engaging with startups (as opposed to merely going through the motions as a public relations exercise). Thus a startup is more likely to respond favorably to the prospect of synergy when it perceives this to be sincere – and this is more likely when the synergy is self-evident or believable.

Ensuring perceived clarity (and reasonableness) of the partnering synergy is important in order to attract high-quality startups.

Thus, ensuring perceived clarity (and reasonableness) of the partnering synergy is important in order to attract high-quality startups.

Consolidating. Next, the startup would ideally seek to consolidate the already-formed relationship it has with a gorilla by achieving a tangible win that realizes the potential of a mutually beneficial relationship. This is plausible when it engages with the gorilla in question using the latter’s startup partnering interface, such as an accelerator or contest to pitch its solution to a pain point of the gorilla. Without a readily available interface, it is often a hassle for the startup to find the right people within the large corporation with whom to establish some joint activity. Thus a startup is more likely to engage closely with an interface when it can see the clear prospect of undertaking some clearly defined joint activity – such as a proof-of-concept project – by using the gorilla’s startup engagement interface.

That said, a startup may be simultaneously enthusiastic and cautious in dealing with a corporation. The startup may be concerned that the prospect of the plug being pulled midway through a project or even that, if it reveals too much of its expertise too fast, the gorilla may carry out the project by itself or in conjunction with some other partner. Startups are particularly sensitive to delays in projects since, especially in the initial stages, they can be very vulnerable to cash flow pressures, for instance, if quick decisions aren’t made to action a project (and process payment for it, if this was agreed). Effective interfaces can make the process of consolidating the relationship more straightforward and fluent for startups – and also ameliorate the fear of being taken advantage of or not treated professionally.

Thus, ensuring that effective (and transparent) interfaces are created is important in order to enable high-quality startups to consolidate their relationship with the concerned gorilla.

Extending. Finally, startups that have consolidated their partnerships by achieving a tangible win – especially ones that are showcased as exemplars – would likely seek to extend their relationship with the corporation. This might entail expanding the scope of the original project, working on new projects, or engaging with other business units or subsidiaries of the corporation. For instance, a startup that has developed a successful proof-of-concept may now seek to move to the next stage of building a pilot for implementation or a primarily technical relationship may morph into a more commercial one. Alternatively, the startup may be on the lookout for additional projects with the gorilla. This may entail working with other business units, even subsidiaries in other markets.

However, the startup may retain a certain level of wariness because, still, the gorilla is likely to be perceived as the more powerful entity. Therefore the startup may also explore the prospect of working with other gorilla partners so that it is not overly dependent on the original gorilla that it initially partnered with. Gorillas that take a more open approach to their innovation network would then likely steer these exemplar startup partners to other potential partners within its network. And even if the startup moves beyond its orbit there is still often scope to maintain the relationship in some fashion by, for instance, conferring alumni status on the startup. This would be part of the gorilla’s efforts to build and sustain a set of exemplar startup partners while keeping the door open to them; at a later stage they may return to the fold and revive their relationship with the gorilla.

A startup that understands the corporation’s synergy-interface-exemplar approach well will be able to better align its own actions with those of the gorilla.

Thus, ensuring that exemplars are cultivated actively (and with an openness to keeping in touch even when the startup moves on to other partners) increases the odds of high-quality startups extending their relationship with the concerned gorilla and its wider ecosystem.

In sum, for its part, a startup that understands the corporation’s synergy-interface-exemplar approach well will be able to better align its own actions with those of the gorilla. Conversely, corporations’ managers who are highly focused on the startup’s perspective are ultimately the ones that are more likely to experience fruitful partnerships with startups. And in the process, corporate managers can gain a better handle on partner selection criteria when considering which startups to engage with because the synergy-interface-exemplar framework points to certain key considerations.

Understanding the synergy-interface- exemplar partnering process is important. But more needs to be done. The other part of the “how” of startup partnering is making sure that a competent partnering approach vis-à-vis startups becomes institutionalized within the company and outlasts the intrapreneur leading these efforts when he or she moves into another role or even to another company. Chapter 4 looks at how to build a startup partnering capability over time.

“Gorillas Can Dance” is available now and can be purchased below via StartupNation.com.

Author
Shameen Prashantham
Dr. Shameen Prashantham is professor of international business and strategy and associate dean (MBA) at China Europe International Business School (CEIBS) in Shanghai, China. His research focuses on what he calls “dancing with gorillas”—how startups and large multinational corporations partner with each other as a means to improve their prospects of innovation and growth. His current focus is on partnerships that contribute to the Sustainable Development Goals (SDGs).
Comments by Vanilla

Excerpt from "The Art of Principled Entrepreneurship: How to Create Enduring Value" by Andreas Widmer (Matt Holt Publishing, 2022).   It’s difficult to teach an art. Perhaps the most one can do is describe Principled...