Sean Ellis and Morgan Brown
Co-Founders at GrowthHackers.com
Sean Ellis is CEO and co-founder of GrowthHackers.com, the number one online community for growth hackers, with 1.8 million global users. Sean coined the term "growth hacking" in 2010, after using it to ignite massive growth for Dropbox, and is the producer of the GrowthHackers Conference. You can connect with him on LinkedIn or Twitter.

Morgan Brown is COO of Inman News, the leading business intelligence source for real estate. A startup marketing veteran with 17 years spent helping early-stage companies find traction and breakout growth, he launched GrowthHackers.com with Sean. You can connect with him on LinkedIn or Twitter.

Latest posts by Sean Ellis and Morgan Brown (see all)

In 2007, the Baylor University football team placed last in the Big 12 South college football conference once again. The team hadn’t gone to a bowl game in over a decade. Then Art Briles took over as head coach, and soon the Baylor Bears were averaging a remarkable 64 points a game and heading to bowl games every year as one of the top-ranked teams in the nation. Key to the turnaround was a new high-tempo, no-huddle offense that caught opponents off guard, leaving them breathlessly struggling to keep up with the pace of play. One sports journalist dubbed Baylor’s offense an “unstoppable system.” The speed of Baylor’s offense not only allows the team to out hustle its opponents: each game teaches the team more about how to win.

By running plays faster and shortening the time between plays, Baylor was able to run about 13 more offensive plays per game than their competitors. Those 13 extra plays amount to a 20 percent increase over the average number of plays for college teams per game, which, over the course of a 10-game season, adds up to the equivalent of nearly two full extra games.

That translates into much more experiential learning, in the actual heat of battle, about which plays work best and in what circumstances.

The companies that grow the fastest are the ones that learn the fastest. The more experiments you run, the more you learn. It’s really that simple. The high volume is ideal, because most experiments fail to produce the results you’re hoping for. Others produce some indication of success but are inconclusive, not producing results significant enough to support making the change tested. Some produce small but not earth-shattering wins. Only very few tests produce dramatic gains. Finding wins, both big and small, is, in other words, a numbers game.

Remember that, generally, big successes in growth hacking come from a series of small wins, compounded over time. Each bit of learning acquired leads to better performance and better ideas to test, which leads to more wins, ultimately turning small improvements into landslide competitive advantages.

To illustrate the power of small gains, Peep Laja, a renowned expert in conversion rate optimization—the science of getting more visitors to a website or app to become customers—loves to point out that a 5 percent improvement in conversion rate every month nets an 80 percent improvement in a year due to the compounding nature of wins. If you were generating visitors through search ads, that increase in conversions would cut your costs of advertising per customer just about in half. This same principle applies everywhere in a company. In fact, small increases in retention can be even more powerful. As a team of researchers from Bain & Company and Harvard Business School discovered, a 5 percent increase in retention leads to an increase in profits of between 25 and 95 percent, because just small gains in retention lead to compounding revenue growth the longer customers stick around.

This chapter will discuss how to run the kinds of rapid-fire experiments that will produce these kinds of compounding wins.

Tempo picks up over time

The volume and tempo of experiments that growth teams can run vary greatly depending on the size of the company and the resources available to support testing. Many of the leading growth teams regularly run 20 to 30 experiments a week, and some run many more. Early stage startups might be able to launch only one or two tests per week and then steadily build up to a higher volume, while later stage startups and large, established firms might well be able to start out with a much higher number. Whatever the size of the company or team, in order to maximize the number of experiments you can run and the gains you achieve from them, it’s essential to follow a highly disciplined process that allows you to create a pipeline of good ideas and efficiently prioritize them. This assures that you can maintain continuous testing at the highest possible speed you can manage without getting sloppy in your execution, collecting invalid test results, or getting bogged down in time-consuming brainstorming and debate about which ideas to try next.

We advise that teams start slow and build to a faster tempo after the team gets its footing with the new process; trying to launch too many experiments right off the bat can lead to poor test implementation, team confusion, and discouragement as targets are missed. Running careless or poorly designed tests can do more harm than good. Just as you shouldn’t try to run a triathlon without proper training and warm-up, neither should you jump into the growth hacking process at breakneck speed. That is a sure recipe for failure.

We’ve developed a four-part cycle and a set of simple but powerful tools for making sure a growth team operates as a well-trained, finely tuned, fast-tempo experimenting machine, which we’ll introduce in this chapter.

Recall that the stages of the process are: data analysis and insight gathering, idea generation, experiment prioritization, running the experiments and then returning to the analyze step to review results and decide next steps, in a continuous loop. No matter what your product or what aspect you are testing, each turn through this cycle should be completed on a consistent interval, preferably in one or two weeks (at GrowthHackers we use a one-week cycle). The cycle is managed by a one-hour weekly growth team meeting to review results and agree on the next week’s set of experiments to implement. 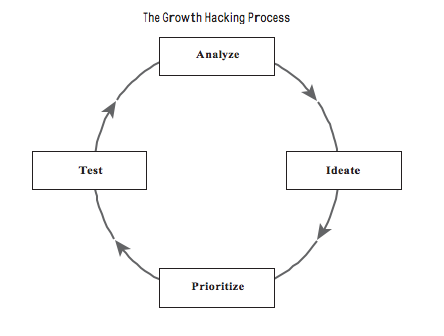 To illustrate how the process works from start to finish, we’ll use a hypothetical case of a growth team that has just been created at a large brick-and-mortar grocery retail chain, but as we hope will soon become clear, this is a process that can work for any team or company—large or small—and for any product or project—anything from a new software tool, to an online retailer, to a media product, to a hardware business and even to a blog or single ad or PR campaign. We’ll describe what all of the members of the team should be doing in each of the stages, and we’ll introduce a model agenda detailing exactly how the crucial growth meeting should be run.

“Hacking Growth: How Today’s Fastest-Growing Companies Drive Breakout Success” is available now at fine booksellers and can be purchased via StartupNation.com.

Author
Sean Ellis and Morgan Brown
Sean Ellis is CEO and co-founder of GrowthHackers.com, the number one online community for growth hackers, with 1.8 million global users. Sean coined the term "growth hacking" in 2010, after using it to ignite massive growth for Dropbox, and is the producer of the GrowthHackers Conference. You can connect with him on LinkedIn or Twitter. Morgan Brown is COO of Inman News, the leading business intelligence source for real estate. A startup marketing veteran with 17 years spent helping early-stage companies find traction and breakout growth, he launched GrowthHackers.com with Sean. You can connect with him on LinkedIn or Twitter.
Comments by Vanilla